PLASA Show returned to Olympia London from 5-7 September, receiving high acclaim and marking a return to normality following the 18 month closure of the live sector. As the first entertainment technology trade show in two years, there was a level of risk involved. However PLASA Show 2021, along with the ABTT Theatre Show which co-located for one year, succeeded in reuniting the industry for three high spirited and productive days in Olympia’s Grand Hall. 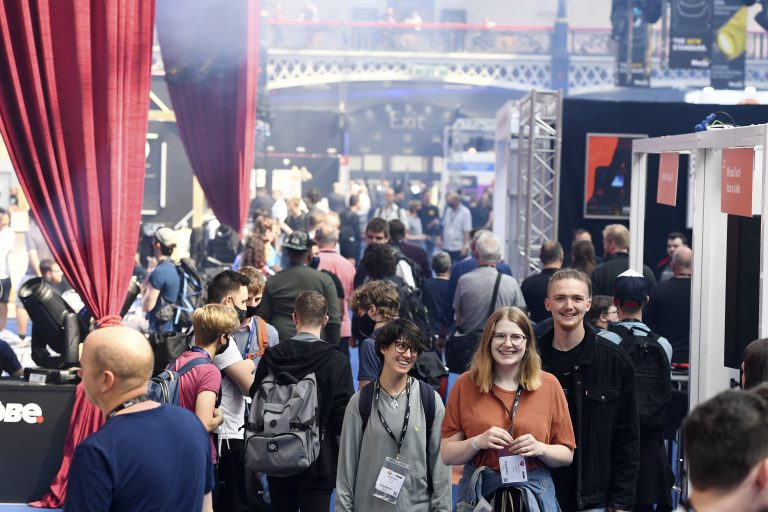 Although the number of attendees was reduced, they remained top quality and similar to previous years: 2/10 were company owners or directors and half were specifiers or final decision makers. Theatre and touring were most prominent with one third of those attending working in production or venues.

Anticipation was high as the doors opened, with a steady stream of visitors keen to check out the next generation of products and catch up with colleagues. Lee House, Marketing Manager for Ambersphere, comments, “When the doors opened on Sunday it was great to see so many people coming through them. This show certainly exceeded all expectations we had. Yes, the show floor was smaller this year, but the atmosphere was bigger than ever.”

Nick Boggon, Marketing Manager for Sound Technology, adds, “We probably weren’t alone going into the show not knowing what to expect, but those concerns didn’t last long. Understandably stands were smaller than previous years but it still felt like the PLASA Show. There was networking of course, but also a genuine desire to see new products and technology trends.”

The ABTT Theatre Show Hub – which featured theatre-specialised brands and associations – centered around the AAPTLE Lounge where meetings looked at emerging industry issues. Robin Townley, CEO of the ABTT, comments, “Locating traditional ABTT exhibitors within the Theatre Show Hub offered a great sense of community and it was tremendous to see so many members of the Alliance of Associations & Professionals in Theatre and Live Events making use of the AAPTLE Lounge. The three days proved to be fantastically successful in providing an opportunity for suppliers, service providers and practitioners to get back face to face and resume the essential art of conversation.”

The people of the industry were just as high priority as the products this year, with areas of the show dedicated to offering guidance. The #WeMakeEvents Hub featured several charities and initiatives including Backup, Acting for Others, #MakeitBlue, Music Support, Stagehand, The Back Lounge, Theatrical Guild, Tour Production Group and We Need Crew.

Promoting wellbeing further, Backup launched their Mental Health First Aid course at the show, and Mig Burgess, creator of the Blackout Installation of 2019, returned to present findings of a survey looking at mental health in the industry.

The show’s headline sponsor Robe dazzled attendees with its recently launched T2 alongside previews of the T11 and the TE – Transferable Engine. Theresa Gibson, Head of Marketing for Robe, comments, “The commitment Robe showed to PLASA as headline sponsor of this year’s show was well and truly equalled in delivering a great event and uniting the industry again. All our staff spoke with high quality visitors and relished the opportunity to establish connection again face to face.”

Avolites celebrated its 45th anniversary at the show with company’s new flagship Diamond 9 console taking centre stage. Astera debuted three on the Ambersphere Solutions stand, picking up a prestigious PLASA Award for Innovation for PixelBrick. Elsewhere, Artistic Licence launched candlePower octo at the show, displayed alongside the new Commissioner multi. Wayne Howell of Artistic Licence says, “We were absolutely delighted to have exhibited at such a successful show. There was a real sense of “we’re in this together” and everyone was excited to be back. This was probably the busiest trade show we’ve done in five years.”

Meanwhile, DiGiCo revealed SD12T software, KLANG presented the KLANG:konductor, Yamaha’s Rivage PM5 and PM3 made their trade show debuts, NEXO released the new epS Series, Shure focused on its Axient Digital ADX5D, and Sennheiser displayed its new Evolution Wireless Digital. Kevin Gwyther-Brown, Business Development Manager for Sennheiser, says, “The quality of visitors was very high. From the moment the doors opened on Sunday, the positive atmosphere did not stop until the show finished on Tuesday. As a manufacturer that has recently launched a new product, we could not have wished for a better platform to show it off.”

New AV technology could also be seen at every turn, including the EB-PU1000 series from Epson, Ruby LED panels from ROE Visual, Teleprompter.Video from Apt-GB and the award-winning CarbonBlack from LANG. Anika Lauth, Deputy Managing Director for LANG UK, comments, “This was our first time exhibiting at PLASA and it certainly won’t be the last. We had great conversations and you could feel the excitement of the industry coming back to life. We were thrilled to be awarded for CarbonBlack. Here’s to next year and a revived industry, new faces and new innovations to come.”

Apt-GB also made its PLASA Show debut. Company founder Graham Gosden, adds, “PLASA was a great success and the Apt-GB >Teleprompter.Video range went down a treat. We were also delighted to get a commendation for the SMVA.”

PLASA Show’s popular programme of free-to-attend seminars were well attended, including sessions by the programme sponsor Vectorworks. There was also a busy panel on EcoDesign featuring lighting designer Rob Halliday, PLASA Managing Director Peter Heath and ETC Technical Director Adam Bennette. Plus Declan Randall, lighting designer and programmer and console trainer for ETC, looked at the new X8 LED array, 8-colour mixing and Eos colour controls. Darren Beckley, ETC Ltd Sales Manager, comments, “The show provided a great opportunity for our industry to move forward after such a difficult period. It was energising to see people reconnect and gather information on all the exciting projects that are happening again.”

The PLASA & #WeMakeEvents Stage hosted well-attended roundtable sessions, addressing Brexit and touring with Peter Heath of PLASA, Andy Corrigan of Viva La Visa, Craig Stanley of LIVE and #WeMakeEvents political team leader Duncan Bell, followed by the #WeMakeEvents steering committee presenting a look back at the campaign’s achievements. Koy Neminathan, Sales Director for Avolites and member of the #WeMakeEvents steering committee, says, “#WeMakeEvents is a testament to our industry’s people and their passion to keep our dynamic industry alive. We were delighted to see so many people attend the session and we welcome you to get in touch and get involved as the campaign evolves.”

Visitors flocked to try the new ChamSys MagicQ Stadium consoles and see the new Maverick Silens 2 and Ovation Rêve E-3 by CHAUVET Professional. Arnaud Thealer, Marketing Coordinator for CHAUVET Professionals comments, “Our team was so happy to meet everybody at the booth again. Feeling the buzz of the industry was magical. Thanks to the training space we had room to do proper product demos, and taking home a PLASA Innovation Award was the icing on the cake!”

Running parallel, the d&b Soundscape Theatre showcased brands including Autograph, DiGiCo, Sennheiser, Shure and White Light. Emma Amadou, Events and Marketing Administrator for d&b audiotechnik, says, “The d&b Soundscape theatre was the just right space for hosting such interesting sessions. Huge thanks to everyone involved, and so great to have good footfall!”

Tim Horton, Sales & Installations Manager for SFL, adds, “There was a great buzz about the show regardless of the reduced numbers. We were particularly proud to host the d&b Soundscape Theatre and create an environment to help people communicate their message. We’re really pleased we were able to be a part of the show and do our part to support the event! 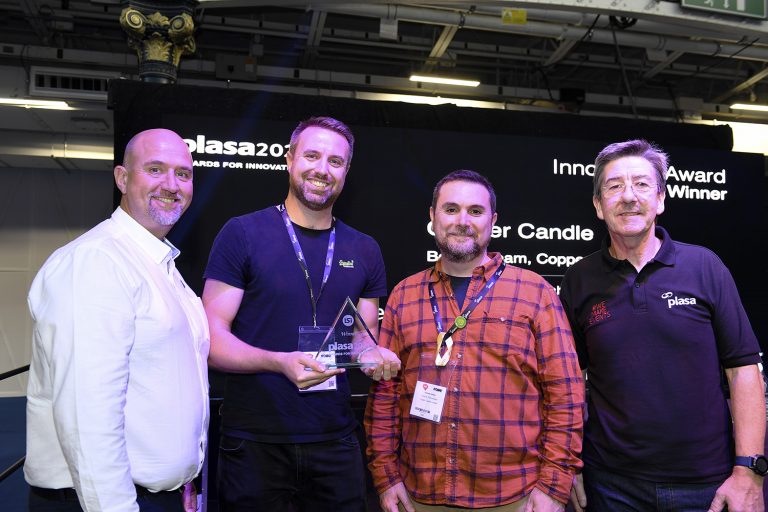 The PLASA Awards for Innvoation, in association with LSi, ran alongside the show once more, showcasing the very latest product developments and technical advancements on the Innovation Gallery throughout the event. James Eade, Chair of the Judging Team, says, “If the Awards are anything to go by, our industry has been forging ahead. 15 years ago we awarded an incandescent lightbulb and fluorescent tube. This year we awarded live motion capture streaming and a carbon nanotube projection screen. It really feels like this industry is turning a corner.”

Copper Candle were presented with a combined award for three pioneering products, with owner James Simpson saying,  “Winning an award was simply incredible, it meant so much to us as a small business trying to make an impact in our industry. It has huge implications for our future and potential growth and means so much to have the ratification of our vision by our industry peers.”

Two of the show’s new exhibitors won an award, including Glensound, whose Managing Director Marc Wilson says,  “We are delighted at the response that we have had from the show at such a difficult time. It’s a new industry for us and we have found many potential customers that are interested to learn more about our Dante intercom, breakout boxes and award winning Divine.”

Mike Wheeler, Operatations Director for EM Acoustics, comments, “We enjoyed an extremely busy show, with overwhelming interest in the extensions to the Reference Series, and scooping an award for the R10 was a real cherry on top. It’s great to feel things return to normal for everyone.”

Looking to the future

PLASA Show 2021 heralded the return of the vibrant live sector. Exhibitors and visitors alike were eager to get back to business and grow their network, but this year with a renewed approach. Farah Minhas, Exhibitions & Events Manager for Audio-Technica, comments, “There was a real sense of excitement and positivity at PLASA Show this year. We realise there are still a lot of challenges ahead, but our attitude reflects that of an industry approaching the future with a fresh perspective.”

Andrew Mckinlay, Marketing Director for Avolites, adds, “Whilst we embraced and rejoiced at the chance to be at a show, we collectively felt the need to reimagine what a trade show is. Let’s take this opportunity to look forward and build the trade show of the future. One where PLASA becomes known again as the leading showcase of our industry across the region and world.”

Peter Heath, Managing Director for PLASA, concludes, “I would like to give my sincere thanks to everyone who exhibited and visited the show, helping make PLASA Show 2021 one to remember. I hope to see many of you at PLASA Focus Leeds in May where our industry will once again demonstrate its resilience and innovation.”