The PLASA 2018 Members’ Day and AGM took place on Thursday 31 May at the Royal College of Physicians in Regent’s Park, London to reflect upon a year of specialist projects, industry collaboration and growth. 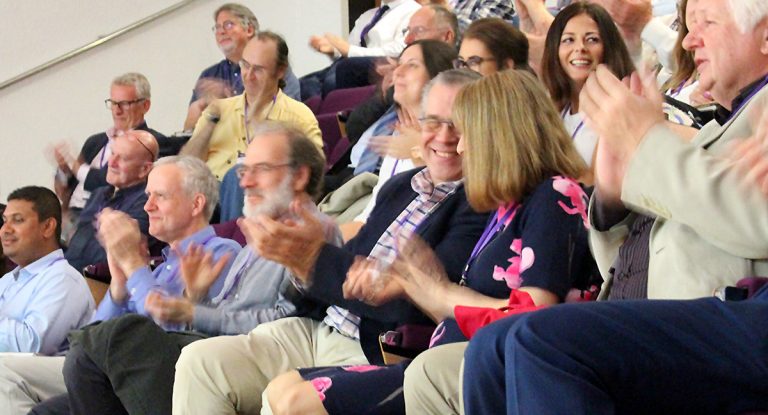 Members and guests enjoyed a productive day with an insightful AGM, followed by a networking afternoon in the venue’s unique ‘physic’ garden. The lively guest speaker, Caroline Russell from The Ideas Centre Group, encouraged audience participation with her creative approach to problem-solving, then attendees were invited to stay for drinks into the evening.

PLASA Treasurer Mark Surtees presented the 2017 accounts and announced that PLASA is in a place of financial stability, highlighting an increase in profits due to commercial growth within Events and Media. Newly elected Chair, Adam Blaxill, added later that all profits funnel back into the Association, enabling PLASA to generate and implement more initiatives to directly benefit its members and the wider industry.

Managing Director Peter Heath described how the last 12 months has been ever-changing and that PLASA has been proactive in connecting and collaborating with its members. Blaxill bolstered this by encouraging members to get involved with the Association’s activities and work within specialist groups if they feel they have something to offer. Both Blaxill and Heath also noted that although Brexit is looming PLASA has continued to reach out to European members to help unify the industry and raise working standards.

There were several presentations from members actively involved in specialist groups including the National Rigging Advisory Group (NRAG), Eco-design and Plugfest. These groups support sectors across the industry in addressing pertinent issues and finding solutions. Robin Elias from NRAG emphasised how “special interest groups allow people to meet and know their peers”. Additionally, Plugfest co-organiser Wayne Howell described the benefits of hosting “a room full of enthusiasts and a room full of equipment.”

Adam Bennette, Technical Director of ETC explained the complex EU Eco-design lighting proposals. He detailed how a successful industry-wide campaign led to two productive meetings with the EU Commission, with PLASA being represented in both. Furthermore, he revealed that an exemption proposal for the live entertainment industry has recently been submitted. Bennette revealed that “the Commission accepts that we do things that cannot meet regulations and wants to find a solution”.

Gareth Coleman, from loudspeaker manufacturer OHM, took to the stage to describe how PLASA’s Professional Development Training workshops helped his brand to go from thousands of online views to tens of thousands simply by changing their marketing strategy. He stated that “only PLASA can bring together industry professionals to learn from one another – from competing companies to contrasting sectors”.

The AGM rounded up by revealing plans to launch a new Industry Research project – the first since 2005 – with results to be ready in time for PLASA Show in September. The report will explore the scope of the industry and provide businesses with intellect to inform their business planning. Heath stated how this report, along with a new Association website, will see “PLASA becoming more efficient throughout the next 12-18 months”.